The first event of the year was a good one. After a long drive down south the team was able to bring home the win.

The 16-car field marks the greatest turnout for the class in many years. Cannot wait to see the great competition in the class this year. With 4 cars capable of running 9 second passes and 4 other cars on the cusp of breaking the 9 second barrier this season is bound to be full of tight competition!

Looking forward to the next event in Sacramento at CMI!

END_OF_DOCUMENT_TOKEN_TO_BE_REPLACED

Rear anti-roll bar
The blades and end links are installed, just need to set the preload on the alignment rack.

Battery Isolator Issues
Randomly the other day the (new) battery isolator started to acting up and of course right when I get the car finished. When pressing the power button to activate the unit, the device will turn on, however, it won’t open the ground circuit to the car. Without the ground circuit open, the car doesn’t get a ground connection to the battery. In speaking with Mark over the weekend, he told me it’s a common problem, but one typically seen after being exposed to high amounts of moisture. Most likely my unit is just defective since is brand new and hasn’t been used aside from a few dozen power cycles while the cars been on jack stands. I’m still waiting for a response from on the company (they’re located in the UK), however, worst case I’ll simply bypass the ground circuit until I can get it replaced. Additionally, and Mark’s suggestion, I’ll carry a back-up unit in the event I have problems at the track.

END_OF_DOCUMENT_TOKEN_TO_BE_REPLACED

The February 28, 2016 marked the first time the team came out with the new setup.

With this time the team was able to secure the #1 qualifying spot so they fired up the grill to await Eliminations. 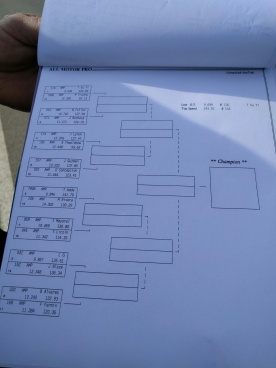 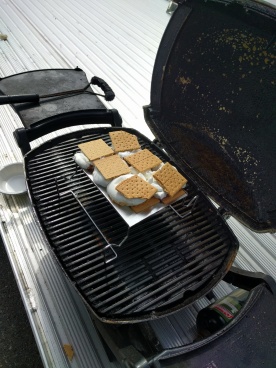 END_OF_DOCUMENT_TOKEN_TO_BE_REPLACED

Tried to get the car ready for the first two IFO events of the year but was not able to finish in time due to a backorder on the headgasket.

Here are some pics of parts that were purchased for the new season! 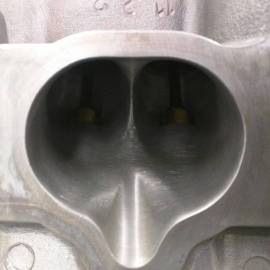 Brakes
I started around 1pm and didn’t finish until 5pm so this process took around four hours but I wanted to make sure I got the bleed just right. Since the entire brake system was overhauled (except for the rear calipers) the bleeding process took much longer than normal. For the fluid I’m using Torque RT700. This stuff is awesome and has worked wonders on my pig of a street car that sees the occasional track duty. Previously the race car was running on Motul RBF600, which worked fine given the extensive ducting system, however, I figured I might as well run Torque, especially given the higher friction pad compound (more friction equals more heat). As for bleeding process, since the entire system was new/dry, I was able to use the fluid recirculation method by running clear tubing from each corner and back into the reservoir. Additionally, speed bleeders were added to each caliper, allowing me to do a single person flush. The bleeding process went perfectly. I was able to get the air out of the front calipers almost immediately whereas the rear took a little longer. Given the lines and master cylinder were new, it took a while to get the air out of the rear. Also one problem with using new lines and master cylinder (that isn’t bench bleed) is that the fluid will become highly aeriated with small microscopic bubbles. This issue also arises if you pump (or bleed) the brakes too quickly or recirculate the fluid in too fast in the reservoir. To fix the issue you need to do a slow bleed and allow for 15mins of rest between each cycle. You’ll notice the microscopic bubbles in the recirculation (clear) hose will form larger bubbles after resting for a while. Eventually and after a few more cycles the fluid will become very clear and without any air. It’s a little OCD but you’ll get a perfect bleed.
Also for the pads I’m running titanium shims in the front with new Pagid RS29 (race compound) in the front and used RS42 (mild street/race compound) in the rear. Since I was having issues with the rear locking even with the bias control, I chose to add more bias by adjusting the pad compounds (previously I ran R42 front and rear).

END_OF_DOCUMENT_TOKEN_TO_BE_REPLACED

The rear trailing arm arrived! A huge thank you to Mark Hein, Frank Gyuru, Integral Machining, and Roy at Crummy Welding. The machining and welds look fantastic and I think it’s better then the original modified arm. This is beyond my best expectations!

Things are moving pretty quickly now as already got the arm painted and hopefully will be ready to reassemble later tonight or tomorrow (assuming the paint/coating is cured).

END_OF_DOCUMENT_TOKEN_TO_BE_REPLACED

Over the weekend I flew out to Florida to visit Mark and his wife, and what a fantastic weekend we had. Mark is such an increasable guy and a wealth of information. His history in racing is stunning, especially his involvement with Honda since the 80’s. I’m not going to go into all the details of the trip as I want to respect his privacy, but here’s a small sample of pictures I’ll share:

His British Super Touring Accord:

END_OF_DOCUMENT_TOKEN_TO_BE_REPLACED

After hitting the 9s pass the team decided it was time to step up the race program.With some help of some Sponsors the following was done.

Much of the competition was running upgraded fuel systems so the Lawrencebuilt team decided to follow suit. Saying goodbye to the trusty Walbro, they moved to a Weldon with upgraded Injector Dynamics injectors. Big thanks to Brian @B&R Fittings.

Jeremy @Drag Cartel stepped in and helped the team out with a new top end and a block from ERL for the new setup.

Javier @Hondata provided the EMS and traction control for the new found power.

With the help of the FCS Degree wheel everything was put together and the team was ready to rock!

As promised some time ago, I’ve spent a great deal of time gathering pictures, videos and literature covering the Belgian Procar series, EERC, BTCC and Britcar series.
Starting in 1997 and in 1998, the Honda Integra Type R pretty much dominated the Belgian Procar series, and was a heavyweight contender in 1999 and 2000. The fame is similar to that of Realtime Racing in the US. In fact, I believe Realtime even used some parts from a few of the teams.
Starting around July 1997, several shops (Foss-Tech, PSI Motorsports, ELR and Mardi Gras to name a few) were commissioned by Honda Motor Europe to prepare a Honda Integra type R chassis to Group N and Super Production race specifications. The intent was to shatter as many lap and endurance records as possible across several racing circuits in Europe. The idea being to generate media and spectator interest to coincide with the European launch of the DC2 Integra Type R. Ultimately several events were won and eight lap records were broken in seven different countries between six drivers; Marco Werner, James Kaye, Altfred Heger, Gabrielli Tarquini, James Thompson and Thierry Thassin.

While is this only a very small sample of what I’ve gathered, below are some videos and pictures covering races in 1998, 1999 and 2000. In particular the 24hrs of Spa for all three years.
Sadly however, I’m still trying to locate videos for 2000 and 2003, when Mark participated with my car.

END_OF_DOCUMENT_TOKEN_TO_BE_REPLACED

Radiator update
The Fluidyne radiator/oil cooler is back from Piranha Ultrasonic and Fluidyne after getting fully inspected and ultrasonic cleaned. No damage was discovered, however, the ultrasonic cleaning did remove a decent amount of fine silt, calcium buildup, Redline water wetter deposits and some fine aluminum shavings. Everything is now is squeaky clean and it’s also sporting a new 14″ SPAL fan that’s welded to bracketry on the core, rather than zip ties through the fins. Additionally, a new radiator cap was also added as the original piece around 15yrs old and likely to fail at some point. Going forward the cooling system will be filled with distilled water and a small amount of Honda coolant. I’m sure some folks will disagree but I’m 100% against Redline water wetter. I HATE that stuff. If not properly maintained and frequently flushed, it will leave deposits throughout the cooling system.

New XRP HS-79 PTFE hose with Hypalon outer covering
As part of overhauling the cooling system (water and oil), I’ve also chosen to replace the radiator hoses with new Honda pieces (trimmed to fit) and also replaced the old stainless oil cooling hoses (unknown age & condition) with XRP HS-79 Hypalon PTFE hose. This hose is by far the coolest stuff I’ve played with. Silly I know, but I’ve been ogling over it since seeing it at the XRP SEMA booth in 2001. HS-79 is incredibly lightweight and flexible and features a larger bore size then other hoses of the same size. It’s also 5-ply with a PTFE inner liner, silicone outer liner, high tensile stainless steel reinforcing braid, outer braid of aramid fiber/Kevlar, and a black CSM Hypalon out coating for abrasion resistance and ease of cleaning.
The downside is the cost and assembly process. Per foot this stuff is ungodly expensive, but worth it for the ultimate hose solution. Assembly wise, you need to use special hose ends, crimp collars and a custom hydraulic crimping machine. Thankfully about five to eight years ago I made the investment by purchasing one of these machines from defunct Baja/Trophy truck team and have been looking forward to putting it to use on this car. I’ll try to take more pictures later but here’s a side by side comparison of the two hoses and the crimp machine.